Republic of Korea,
Including One Exhibition Center
KINTEX

※ First in the world to receive the marketing awards of UFI and ICCA, the two most prestigious international associations in the global convention and exhibition industry

ICCA - the International Congress and Convention Association - announced that KINTEX was recognized for the ICCA Best Marketing Award. With this honor, KINTEX became the first company in the world to receive marketing awards from ICCA and UFI, the most prestigious associations in the global exhibition and convention industry.

ICCA, established in 1963, is the largest international association in the convention industry, with 1,175 organizations and companies from 92 countries participating as members. The ICCA has awarded the ICCA Best Marketing Award to recognize the excellence and outstanding achievements of organisations in their effort to market their destination or product.

This year, in consideration of the socio-economic situation caused by Covid-19, five members were recognized for each field under the theme ‘Leadership in Changing Times,’ and revealed at the ICCA Congress held in Kaohsiung, Taiwan, on November 3. KINTEX was recognized in front of convention industry leaders from around the world and Frank Yang, director of convention marketing of KINTEX presented its innovative framework for re-opening the venue during the pandemic which has been used in many other venues and destinations around the world.

KINTEX presented a case of wisely overcoming the negative effects of the Covid-19 pandemic through an 'innovative framework' in a crisis situation. The judges gave high marks for creating a comprehensive and innovative framework for re-opening a venue during the pandemic, which has subsequently been adopted in different parts of the world as the go to standard. In particular, KINTEX's quarantine system was adopted as a model example in the Covid-19 quarantine manual jointly issued by UFI(The Global Association of the Exhibition Industry), ICCA(The International Congress and Convention Association) and the AIPC(The International Association of Convention Centres) and presented as the global standard.

Earlier this year, KINTEX received global attention by safely and successfully holding an exhibition for only the second time in the world amid the Covid-19 pandemic. Although 89 exhibition and conventions were held from May 8th to August 17th which drew 330,000 visitors, no confirmed

cases of Covid-19 occurred due to a thorough quarantine system. KINTEX’s infection prevention system was adopted as a best practice by the Korea Centers for Disease Control and Prevention(KCDC).

※ KINTEX is the largest convention and exhibition center in South Korea, located in Goyang city, adjacent to Seoul. KINTEX has led Korea’s exhibition and convention industry since opening in 2005. KINTEX is home to Korea’s most representative exhibitions including Seoul Motor Show, Seoul Food, and SIMTOS. Currently, 1,300 business events are held at KINTEX annually, and the venue is expected to reach full capacity within a few years. When the expansion project, which is presently underway, is completed, the event space will be expanded from the current 108,000sqm to 180,000sqm making KINTEX one of the 30 largest exhibition centers in the world. 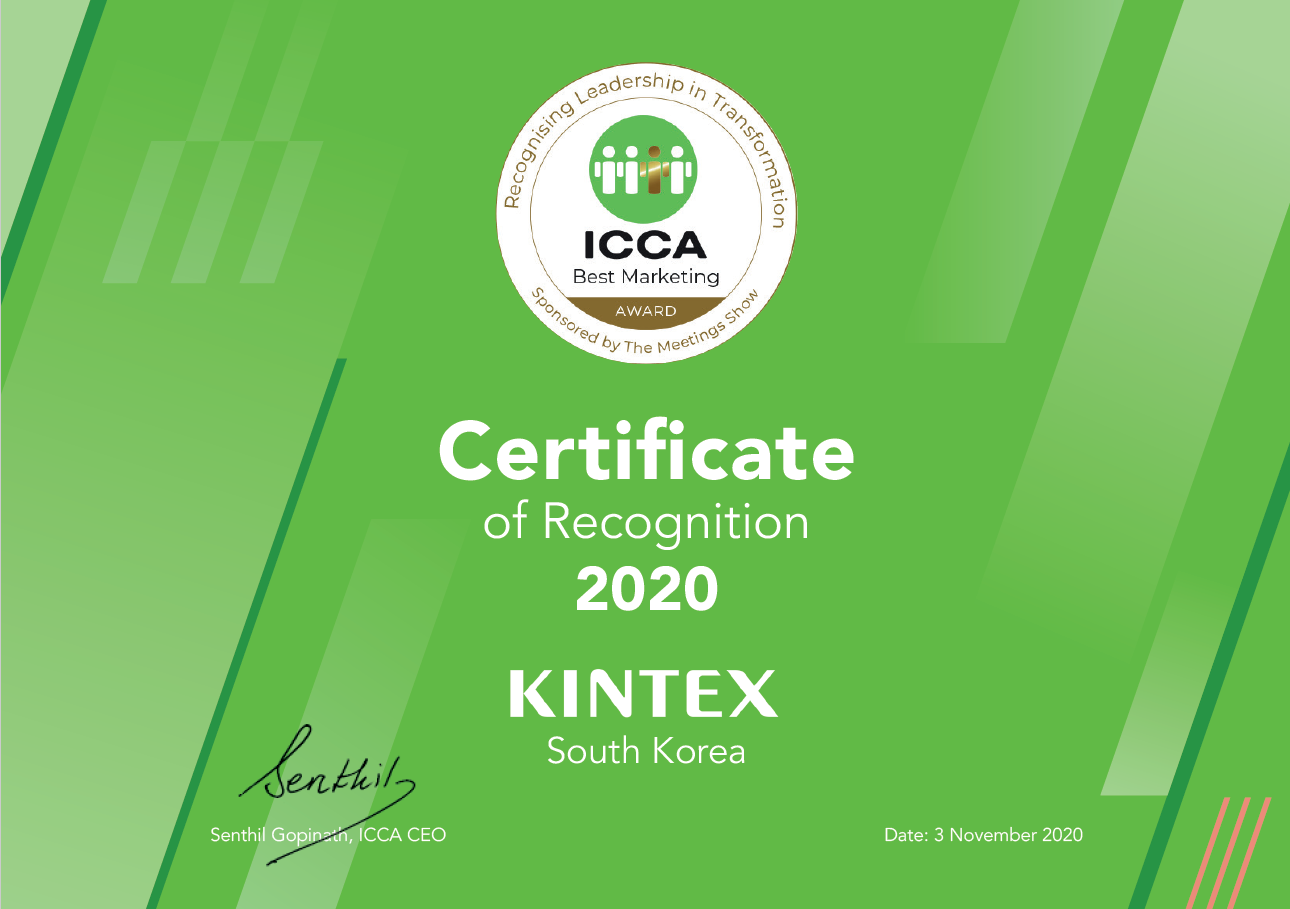 Prev
[Contribution] New Delhi’s IICC and the Status of the Korean Exhibition Industry ...

Next
No Next Data.